I have kept to myself for so many years with my making. People ask where do you sell it? Who is it for?
Its hard to explain that it is too precious to sell. It causes me far too much pain to make, so I cannot put a value on it.
But perhaps I do need to sell off some of these damm tools I keep making...

Lately (say last 2 years) I have decided to slowly try to meet a few people and maybe even talk to them.
Some of them I have been following for a long time and now I have had the pleasure of meeting or swapping emails with quite a few of them. Some have been very helpful, enthusiastic and kind.
People all round the world. Perhaps some of them will be reading this now, a little thank you from me now, for being great at sharing - one of my main reasons for starting this blog. Give something out to the web. Record some stuff.

David Barron put some of my work up on his Blog which was nice:
http://www.davidbarronfurniture.blogspot.co.uk/2012/05/more-customer-work.html

David is a superb craftsman and his contributions to Furniture and Cabinetmaking are top class, I have had great pleasure in reading his numerous contributions and he shares 2 of my woodwork passions, planes and James Krenov. He is a very inspirational maker. As I said to him at the Yandles show, he holds a dream job for me, making and selling cool tools and planes he has made! If only I had the strength there is nothing more I would rather do with my time and skills. But every cloud has a silver lining and so I get to keep what I make...umm....running out of room. Check out his website - he sells some nice tools.

He liked the 'Hallstand' below - its in my front room now, I made it when I was 19.
No straight edges, very complicated construction, immaculate finish from hours of fine finishing.
Word of warning - do not lock yourself into a room all weekend wire wooling.
It will shred your mouth and lungs till they bleed, honestly I know.

I got a B+ for it if I remember. It all comes apart so you can transport it. My friends on the course always got A's.
At least I hung out with the right crowd - mind you they were (and still are) 10 years older than me...
You can guess what its all about, contrast.
The sharp edges blending into the round smooth shapes, 2D elements and 3D elements. It comes out over 20cm from the wall. Yin and Yang, dark and light, inner and outer reflections, balance, positive and negative etc. 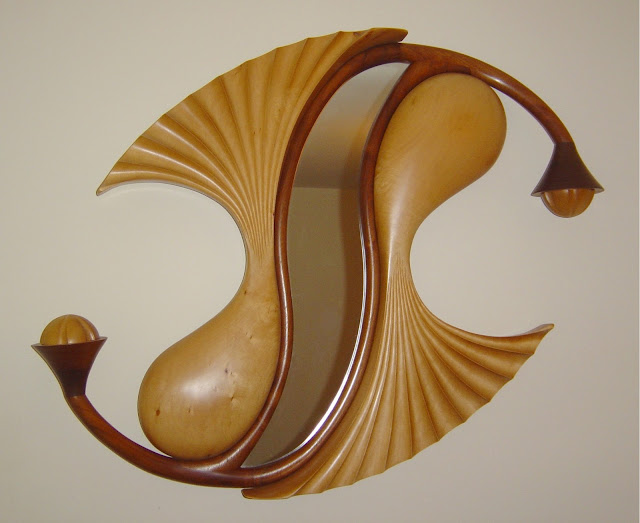 Email ThisBlogThis!Share to TwitterShare to FacebookShare to Pinterest
Den Building

Much is missing from a life without a Den.
I have a grown up one which I call a workshop. Men in Den, or is it man in shed?
I used to make lots of them in the woods when I was younger.
I have many books on how to make tree houses but no tree...

So I made my son a bender from some birch in the woods a few years back.
He loved it and wanted to eat every meal out in his den. But then he stopped. Could not figure it out.
Then one day he admitted it was because of the snails - so time to build a snail proof den.
The sort of den I wished I had when I was tiny. 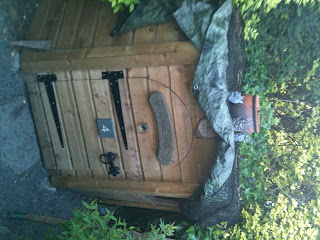 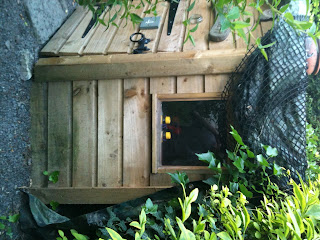 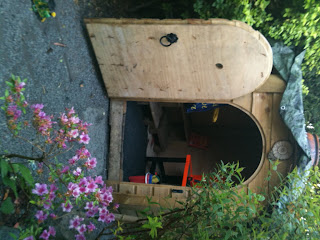 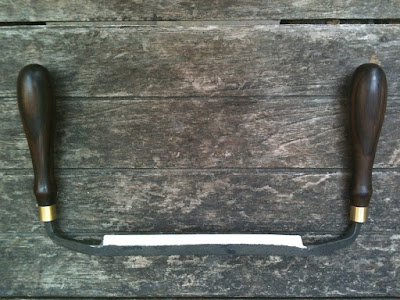 This is my first project made and evidenced on my Blog so I am happy today. Much time and though has been given to the securing of the tangs to the Rosewood Handles. My last idea was a small hole through the brass ferrule and the tang - Araldite to secure a hardened nail hammered in and filed off when set.

However I have only wedged these tangs in and been using it quite a bit to trial it - no movement at all. So the simple approach again - I filled with Araldite and hammered home the tangs (remember much time was spent reaming a perfect fit on these)

'Square tang round hole' I hear you say?
Milliput (epoxy setting putty adhesive - comes in black which is great) fills the larger void and with a wet flat edge gives a quick finish.

I love the contrast between the rough finish and fine surface - this I suppose is why I love japanese tools so much.

Incidentally it is a 20 degree ground edge with a 30 degree secondary bevel, slight convex surface to 'flat' side to allow the edge to come clear and not dig in - an important element for how carving tools function. 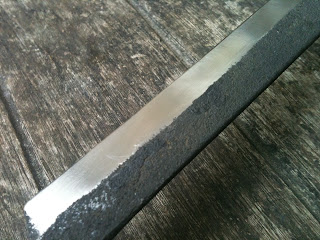 I would expect a picture now of loads of shavings on the floor next to a pointy stick - or a smiling hippy in the woods with my Drawknife making some hurdles with a grin. Perhaps a shaving horse and good boots squeezing the life out of a Harry Potter broomstick as my tools cuts the spike...

Well tough - it is not happening.
No silly shaving pictures please, well not until I start talking about my micron record with my planes...

I am going to get a sheath made for it now and get on with the next projects.
Posted by Unknown at 13:18 No comments: 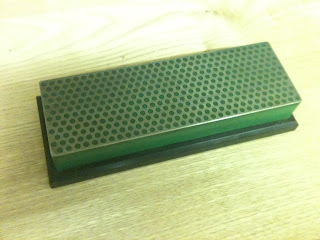 In Praise of the Diamond Stone.

A lot is written about the use of stones. I probably have one of every kind (except a true natural waterstone due to their price - one day...) So I have a little experience. But I have had this stone for about 20 years now and the edge it gives is like a mirror and it cuts so damm fast, always perfectly flat. I paid about £50 for it back then and I think its still under £60 now. Worth every penny, very under rated are diamond stones.

There is now a DMT equivilant to a 8000grit waterstone - that would be worth a look at. But I still finish off with a 10,000 grit waterstone for my finest edges.
Posted by Unknown at 13:03 No comments: 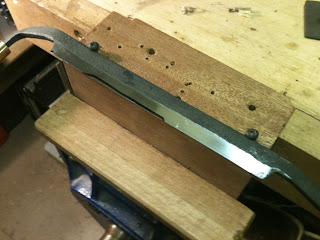 Time to make this sharp - really sharp.
Jim Kingshott suggests a jig to hold the blade in, but as my Drawknife is curved this would be time consuming to make.
This jig took seconds to make and works pretty well. The blade is 'sprung' under the raised heads of 2 screws and allows you to flick the blade over to do both sides very quickly.
You can see my black permanent pen marks to guide the process - often underestimated is the importance of accurately blunting the whole edge with a fine stone - a great tip I picked up from Chris Pye's excellent books. As Jim points out in his 'complete sharpening' often only the middle is worked, over time a concave edge is produced, I have actually curved mine convex slightly for the start of its life.


Time to get out the Strops! These edges need to be mirrors.

I love picking up old dovetailed boxes made with care from car boots / antique shops and giving them a good use.
Very useful for keeping dust and cross contamination down to a minimum. 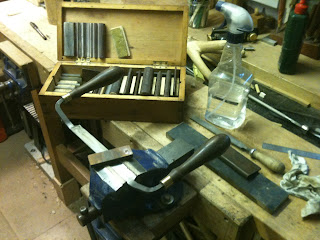 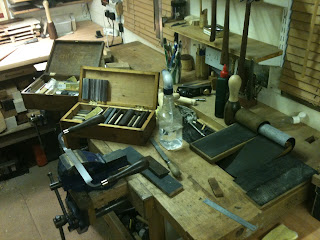 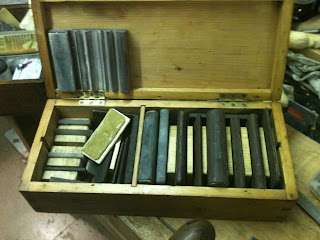 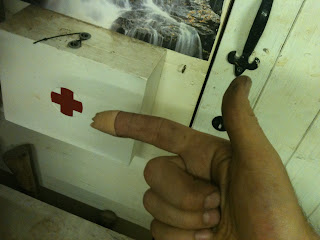 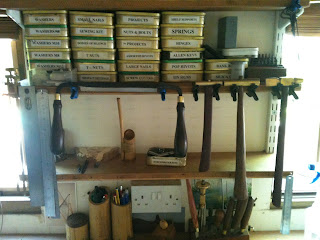 Maybe I could hang it here when its done?!
I have just cleared a whole shelf - took me years to get round to it - I just moved everything up a bit. Simple really.

Email ThisBlogThis!Share to TwitterShare to FacebookShare to Pinterest
Posted by Unknown at 14:31 No comments: 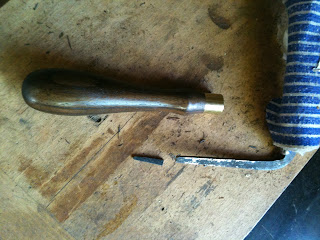 Even with help these darn tangs were too long!
Originally I had meant the handles to be shorter and I was goning to tap the ends with a recessed bolt - but as my friend Pete would say - there is probably a simpler way.... 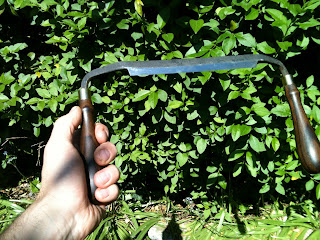 I like the photos Bill Carter takes holding his planes out with a garden backdrop - the idea you just hold it and snap, is nice and simple - I have in the past spent too much time making backdrops, a barrier to the quick capture. However the wonder of the iphone is I never use my nice camera anymore - oh well.
Bevel is good off the diamond stone - I had previously linished the bevel and back before my brother tempered it a nice straw for me.
Now its time for perfection, its the FIRST of many collabrative pieces I hope. 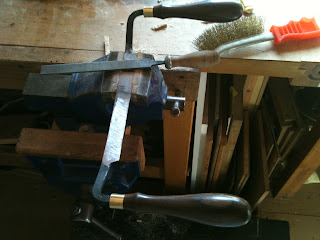 This will take a long time and is too dangerous for my little helper - that edge needs to be kept well clear of!
A friend of mine cut through his artery in his wrist once sharpening a draw knife - apparently made a real mess in the workshop...
Probably be week or two before this is finished - then I want to commision a leather working friend to make a sheath.
Posted by Unknown at 14:21 No comments:

Time to get Blogging

Well I thought a simple start would get the ball rolling easier...

I have enjoyed reading so many Blogs this last year or two it was logical to start recording a little of what I am designing and making for the same reasons (and a few others) as the rest. Please excuse the fact the objects I make take a long time, I can only do tasks in short amounts, chronic pain in my tendons, a result of a repetitive strain injury, has for the last 18 years kept my making dreams in check, even typing this is a painful task.

One of the little projects I have been working on lately is a draw knife, made by my brother to a design we agreed on. My birthday present this year was about 8 chipbreakers, very thick (6mm ish) so watch this space as I make these into planes - a few are already tuned up and fitted to laminated irons and the wood is seasoned and ready too.
So to keep in with the the 'rosewood handled' theme of many of my cabinet making tools, I wanted to turn some handles for it. Being a 'little' out of practice on the lathe I decided to make about 3 handles a day for a while. Got a nice box of spares now - great thing to do with off-cuts. Each one has its own story. Once I was happy I was back on form (10 mins per handle) I made the handles.