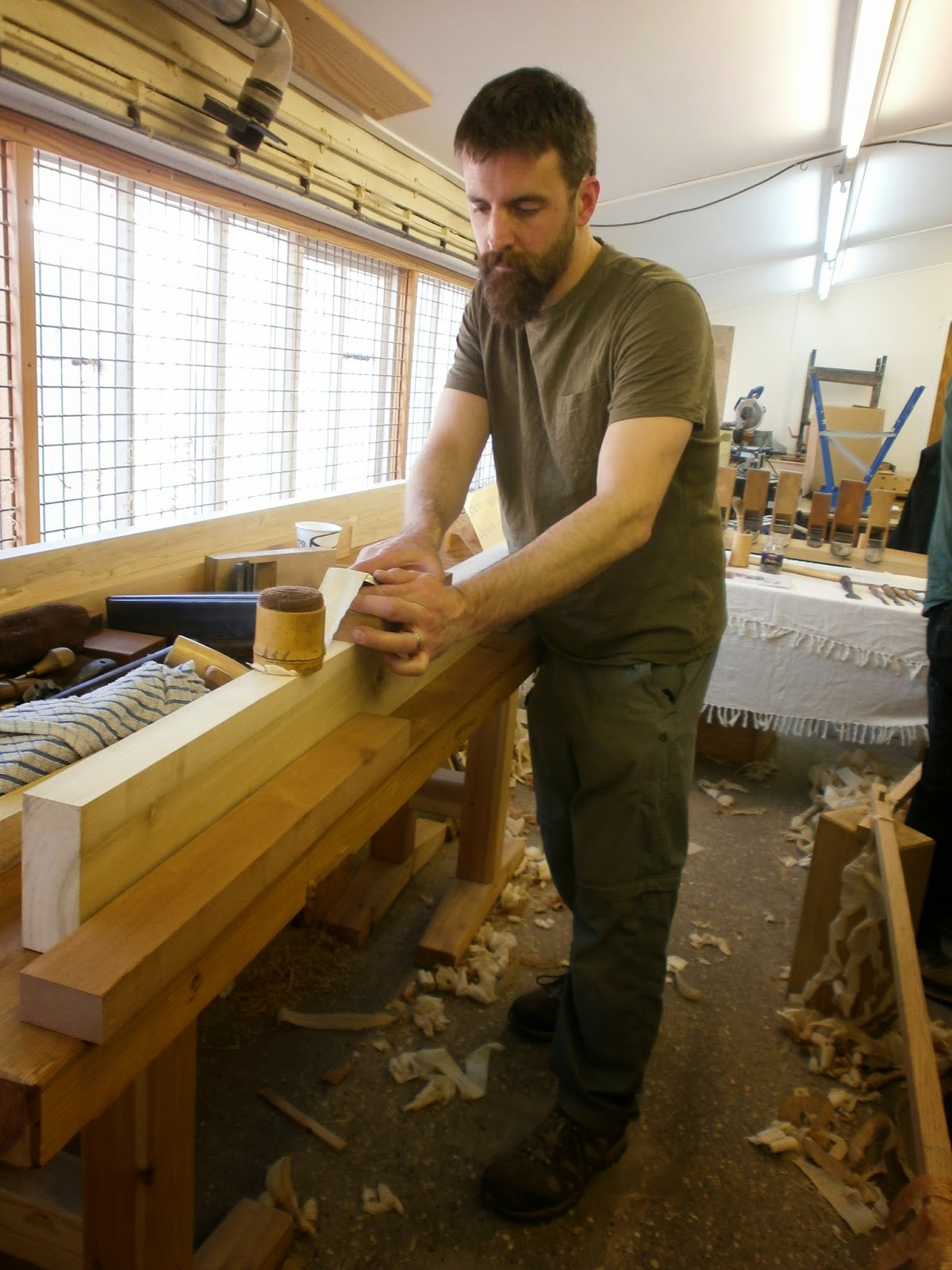 So this is me at the Yandles woodworking show.
I pulled a lot of shavings with my Mon Tsunesaburo Kanna.
I got to a nice point where I could drop a weight on the end
of the shaving then just pull a perfect gossamer shaving, straight and true.
Got some nice feedback, few people have ever seen a plane do this,
its not a common thing a western plane can do!
Got into some interesting conversations...
Wish I had more pics of those lovely shavings!
Duhhh.... 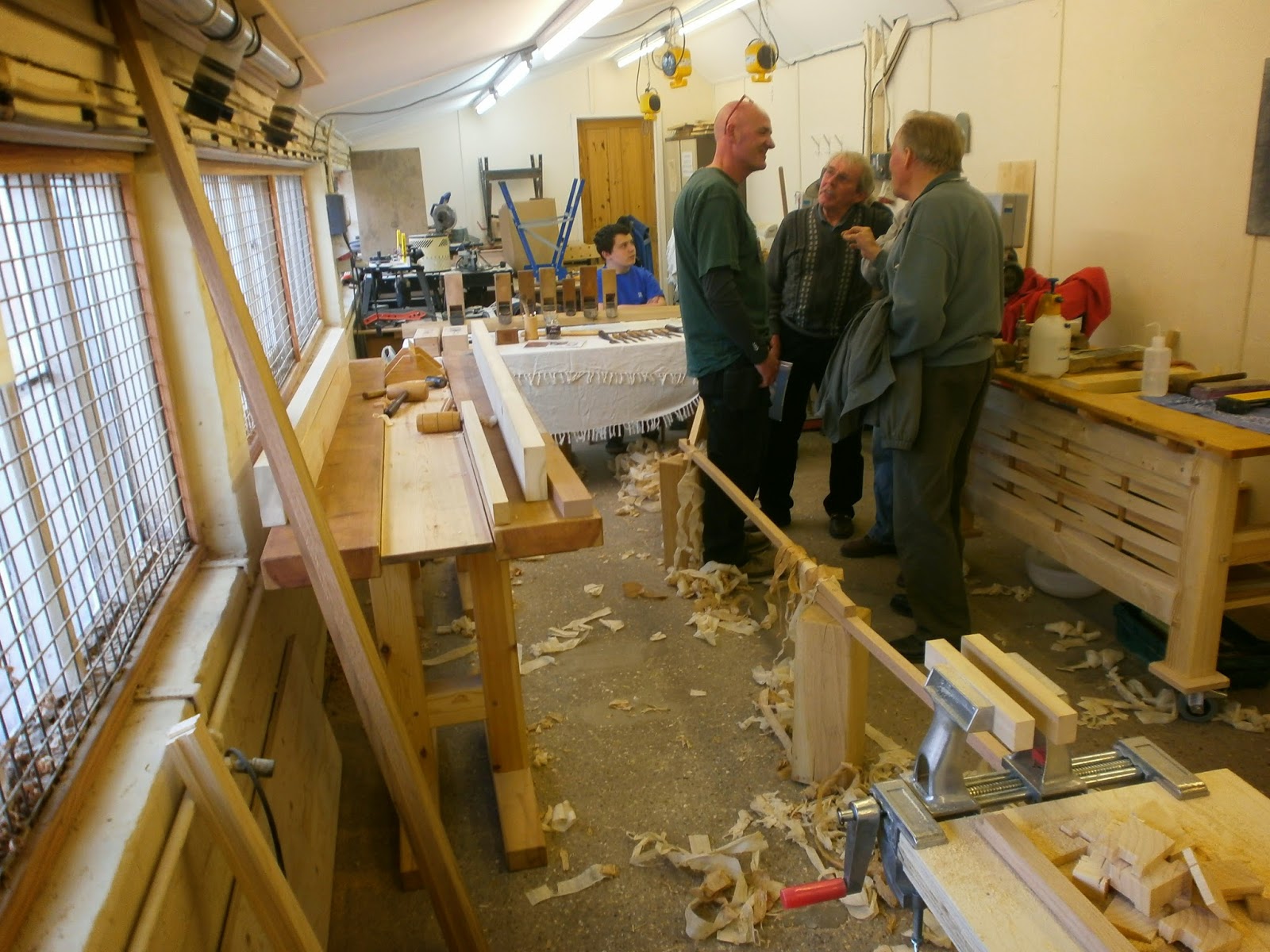 Many thanks to all those who were there,
Andy, Harvey, Michael and Sue, John, Ian, Ray and Lillian,
I also met up with lots of old friends, acquaintances and
woodwork nuts and work colleagues! 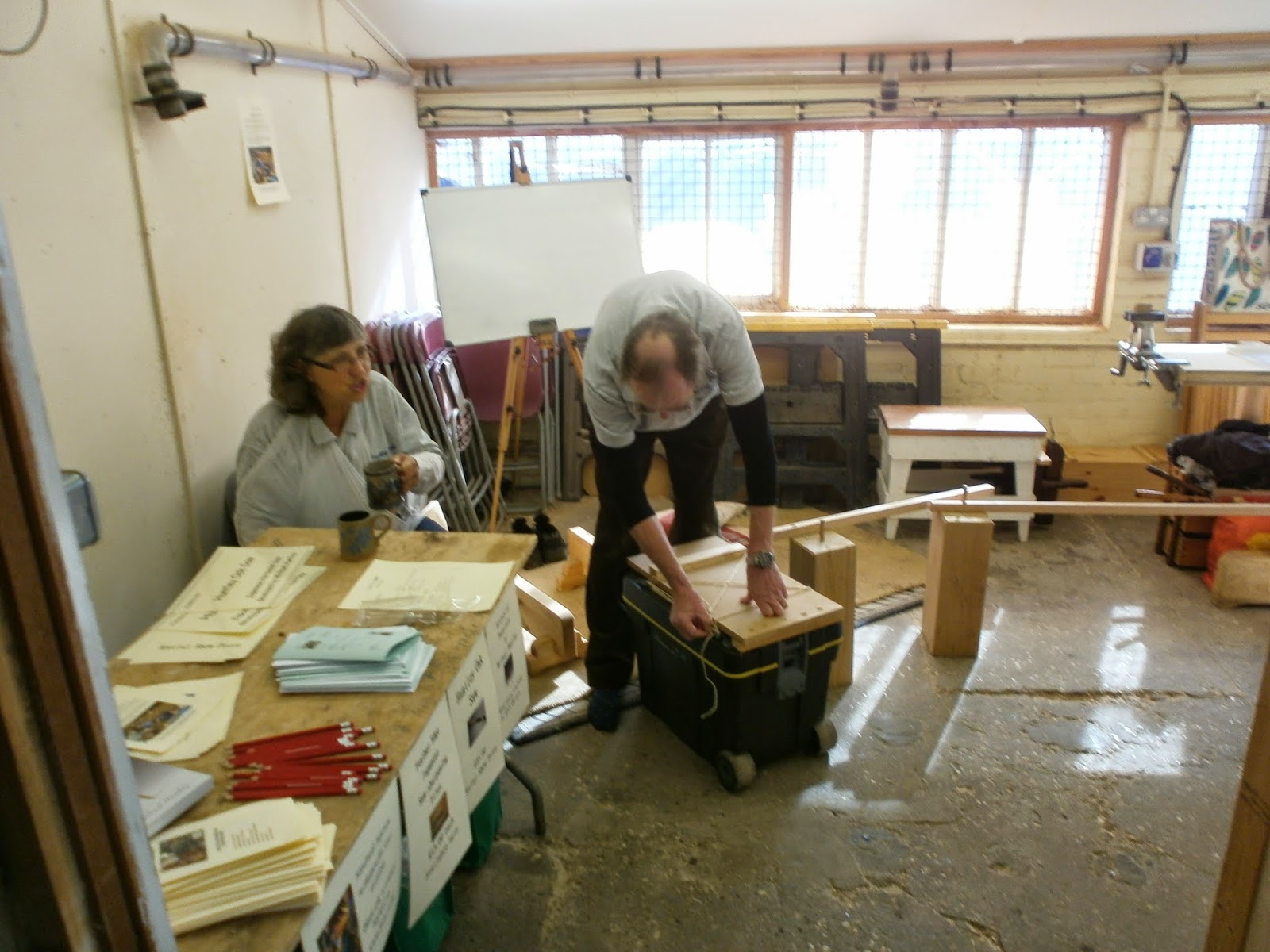 Michael and Sue Huntley (http://www.hsow.co.uk/)
Setting up the show - Sue did a great job of welcoming everyone,
but had to field off lots of questions about her arm in a sling!
(nothing woodwork related!)
(Apologies for the unflattering head shot Michael!)
Michael did some saw sharpening and also had his
'Huntley Oak Saw' for sale, which I purchased!
About time I gave it a workout - Michael designed the teeth specially
and has had them made to his specs, the only Japanese Saw that
I know is specifically for Hardwoods, such as,  ummm Oak of course!
Talking of Saw sharpening John Tuffrey http://www.johntuffrey.co.uk/
asked if I had any blunt saws (which I do have a few of!)
and kindly used one as a demo throughout the day, he wanted to finish
it for me - but I managed to persuade him to leave me some work to do!
I was very grateful for the tips he shared with me - I have all the kit now,
time to get sharpening - its the new skill I want to master!
Thanks again John, I am very inspired!
Now where did you get that optivisor from again...
Luckily John had a plane that needed tuning up,
By the next day we had it taking some nice shavings! 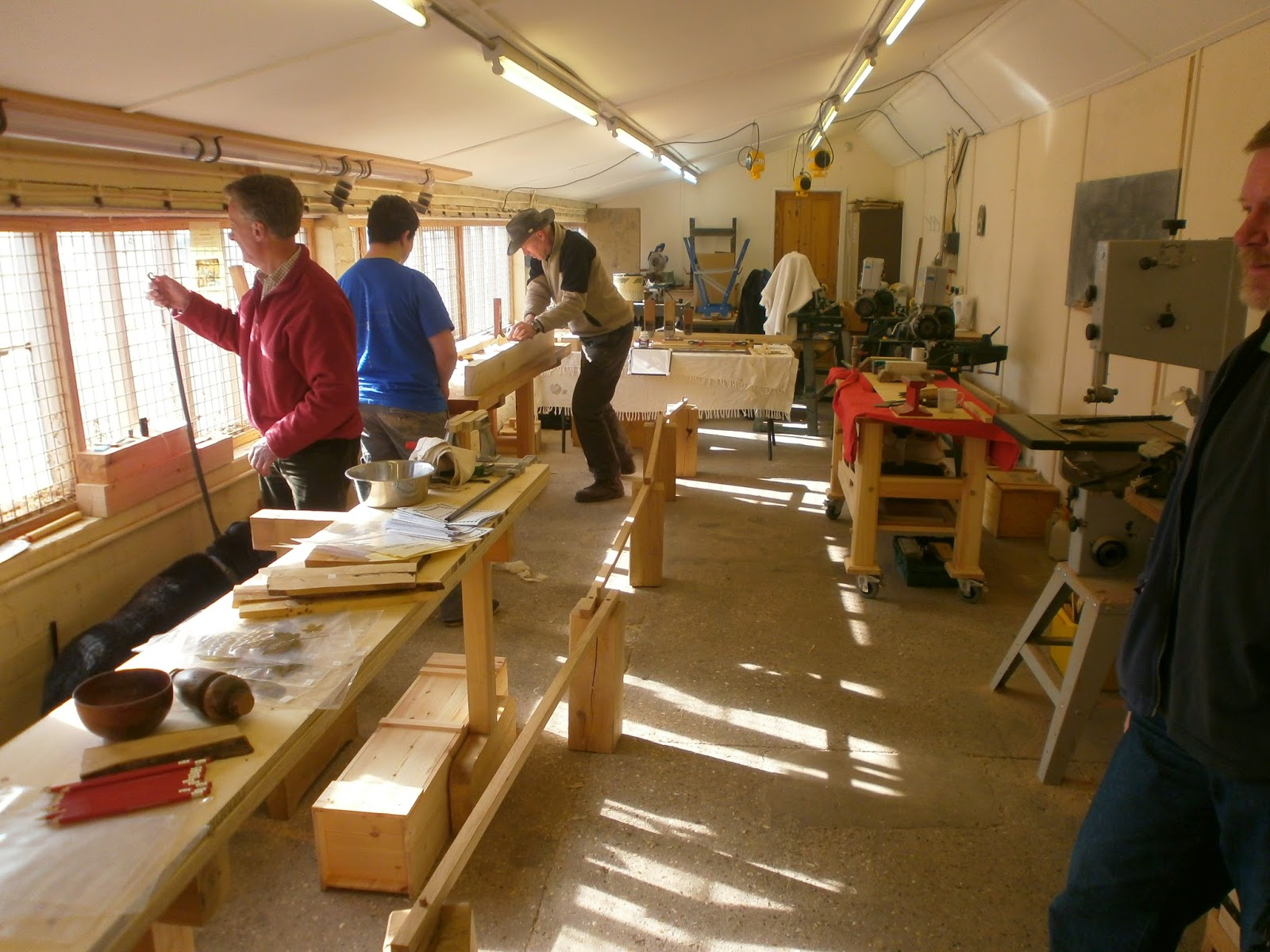 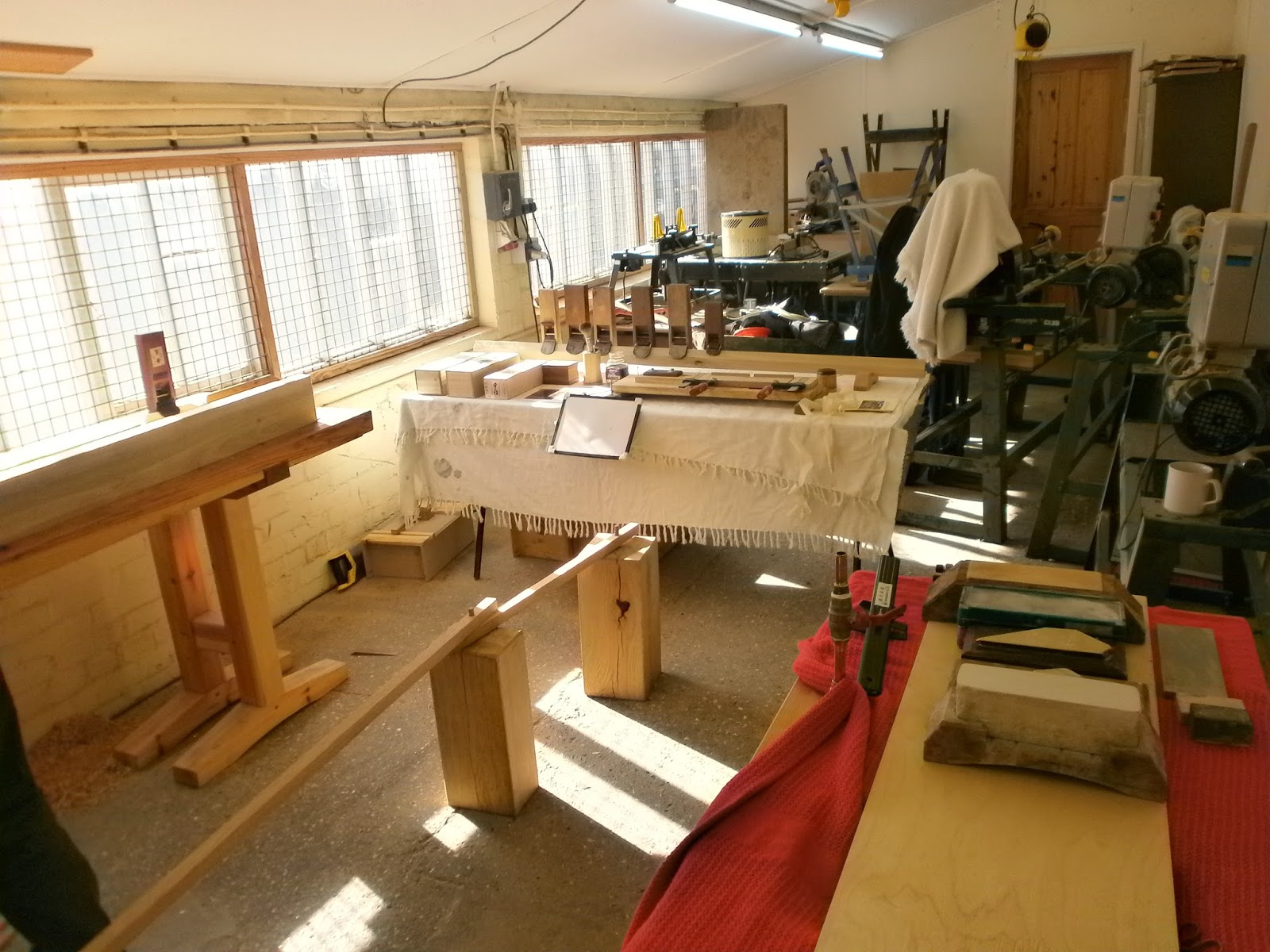 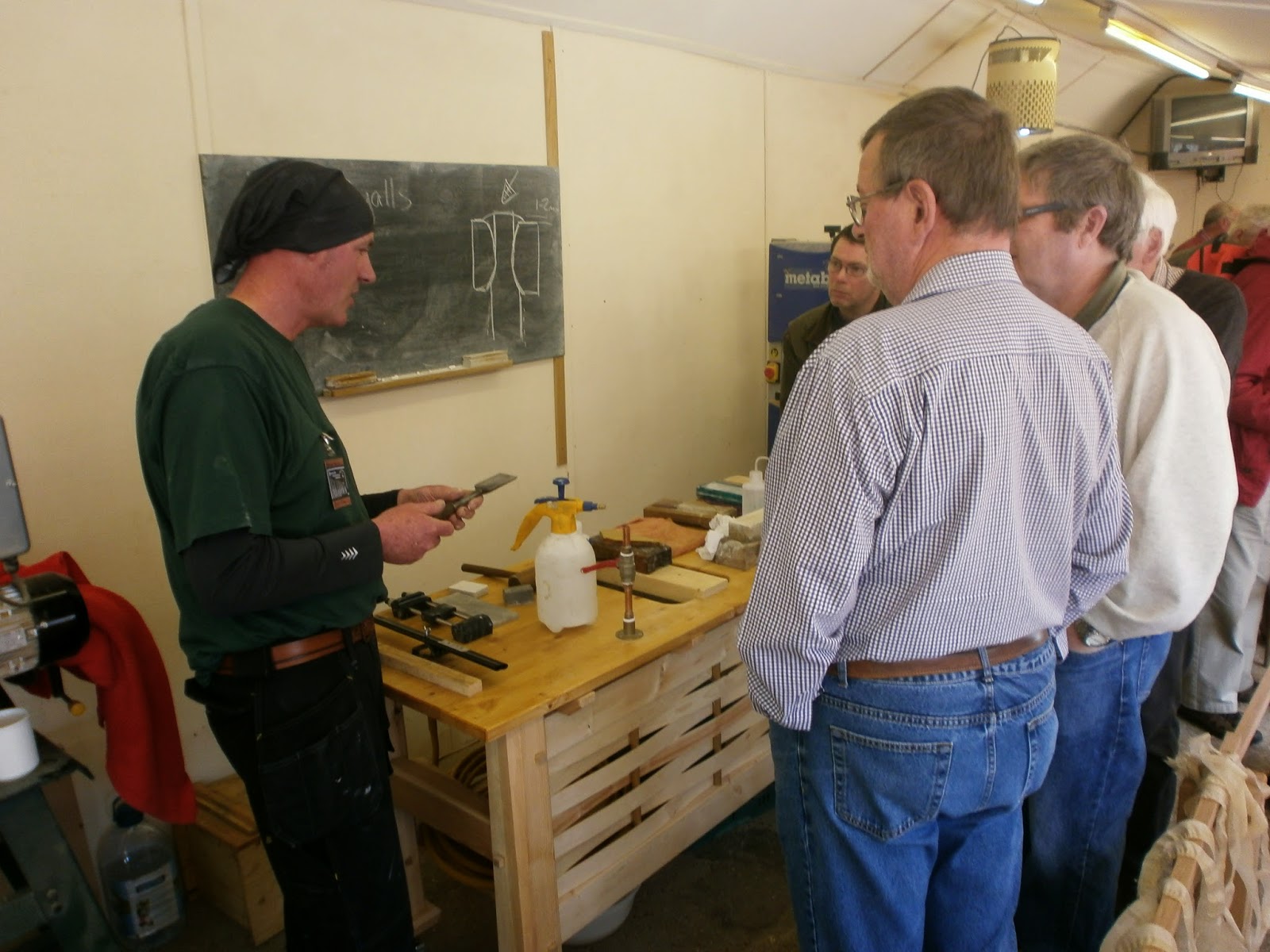 Andy (http://www.timberframing.co.uk/) doing a chat on sharpening.
We had a great day, lots of banter and things to learn!
I really enjoyed getting my hands on some of his lovely Kanna,
and a real Inomoto Dai! 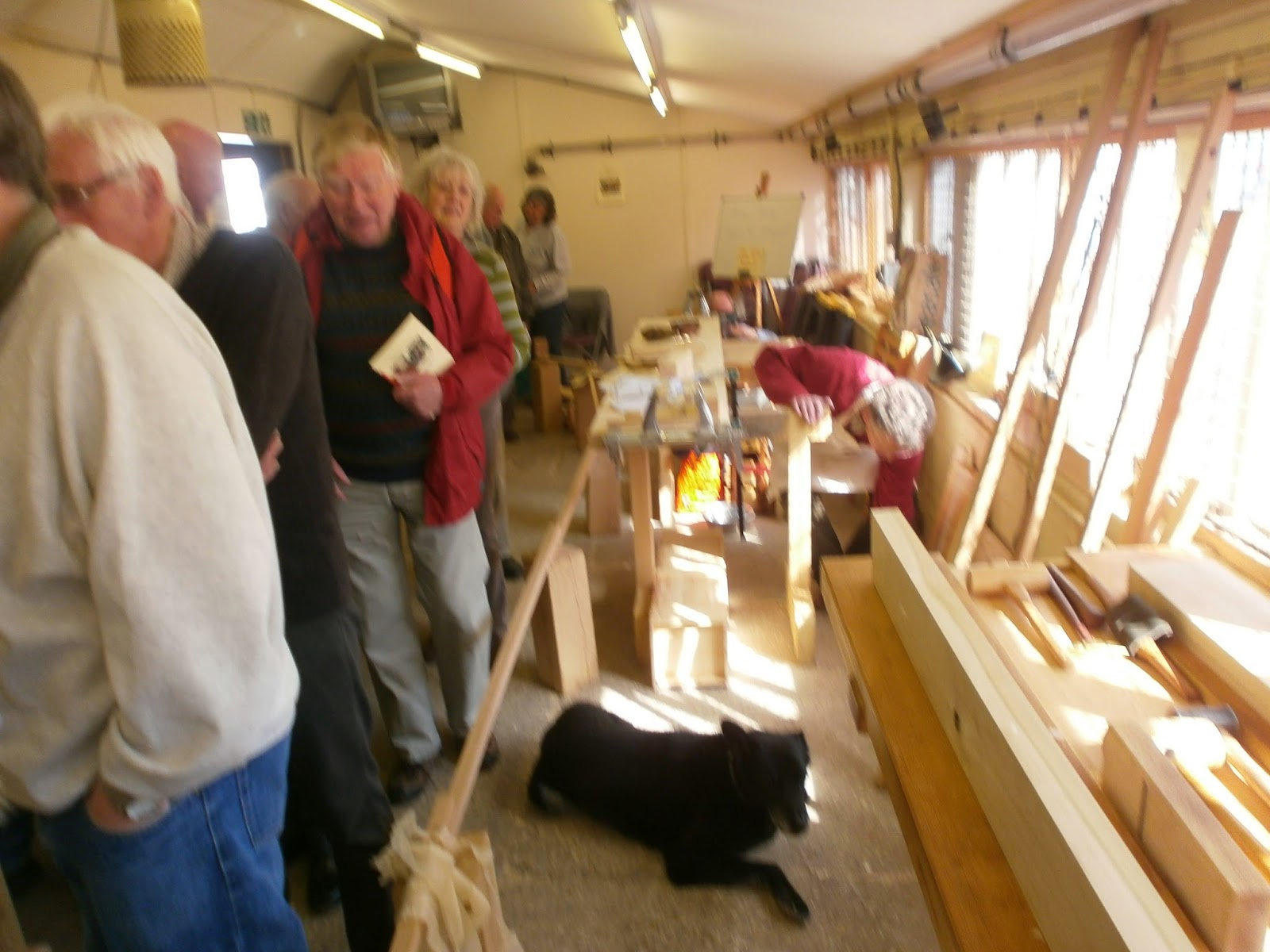 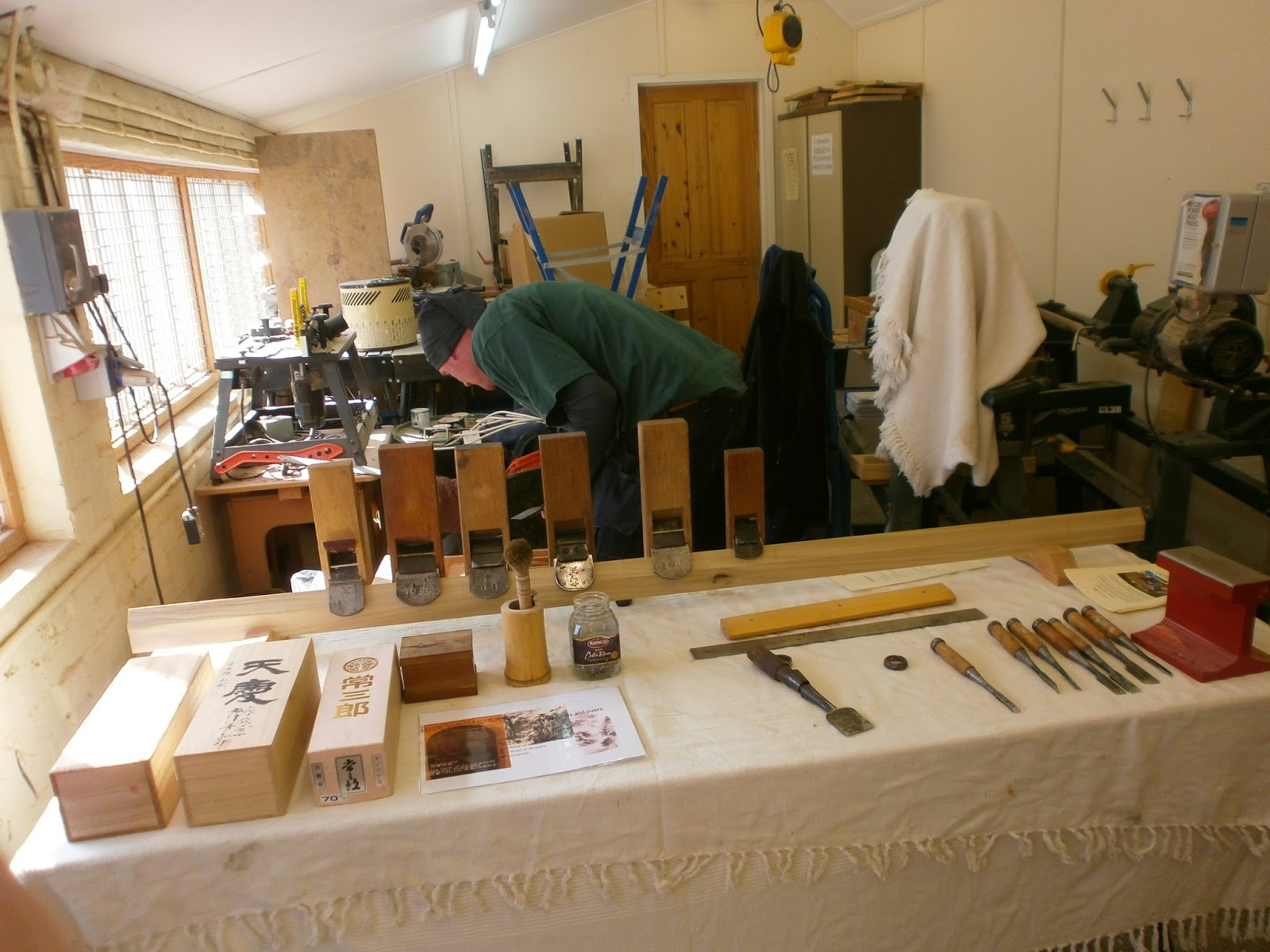 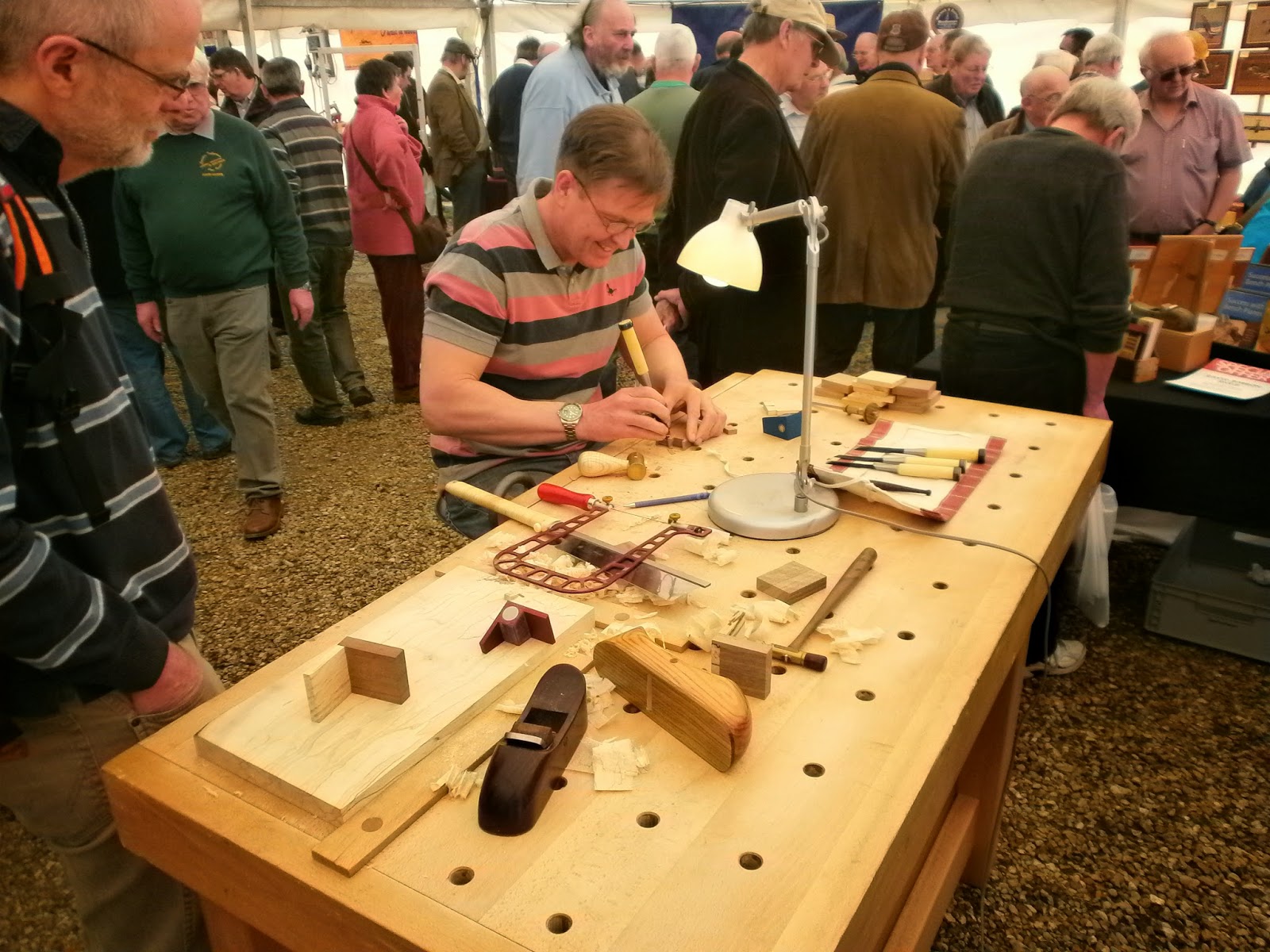 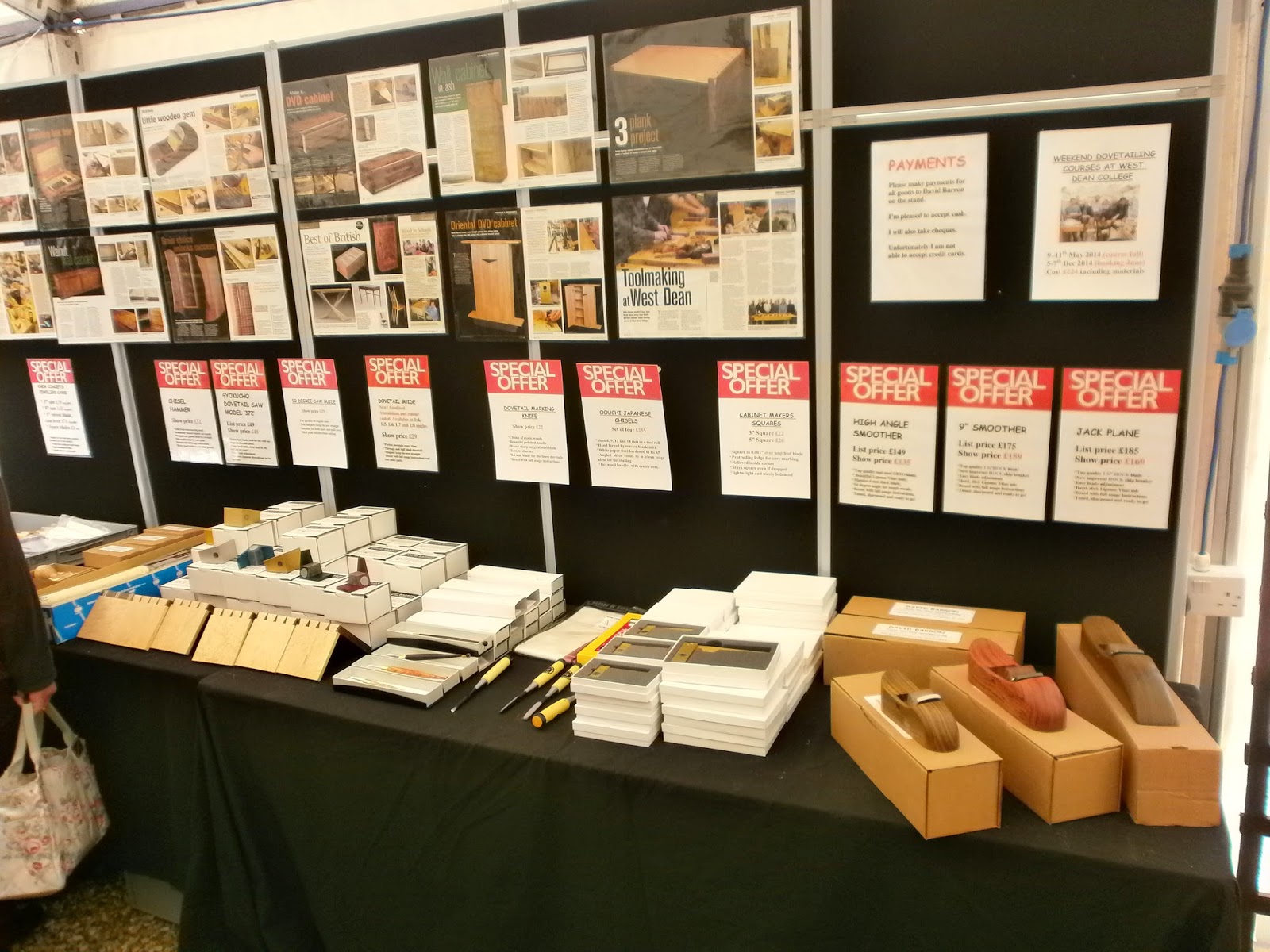 Every year David's set up gets slicker and his tools better!

I mean those new squares are genius - the best new tool update
in design I have seen for a long time.
Little did David know I only wanted one thing from this show...
one of his 1:8 dovetail guides, but then I got cold feet,
as it was a luxury item I really don't need, BUT just as I was saying
my goodbyes I spotted his seconds section - with one guide left,
a 1:8 as I had wanted - I was so stunned I could not believe it and
thought there must be a mistake - in my head, I ended up
checking with David - this is 1:8 for hardwoods isn't it?!?!
So thanks David - I also ended up with a few other little pieces,
more for the fact they come from the man who inspired me,
to start this blog! 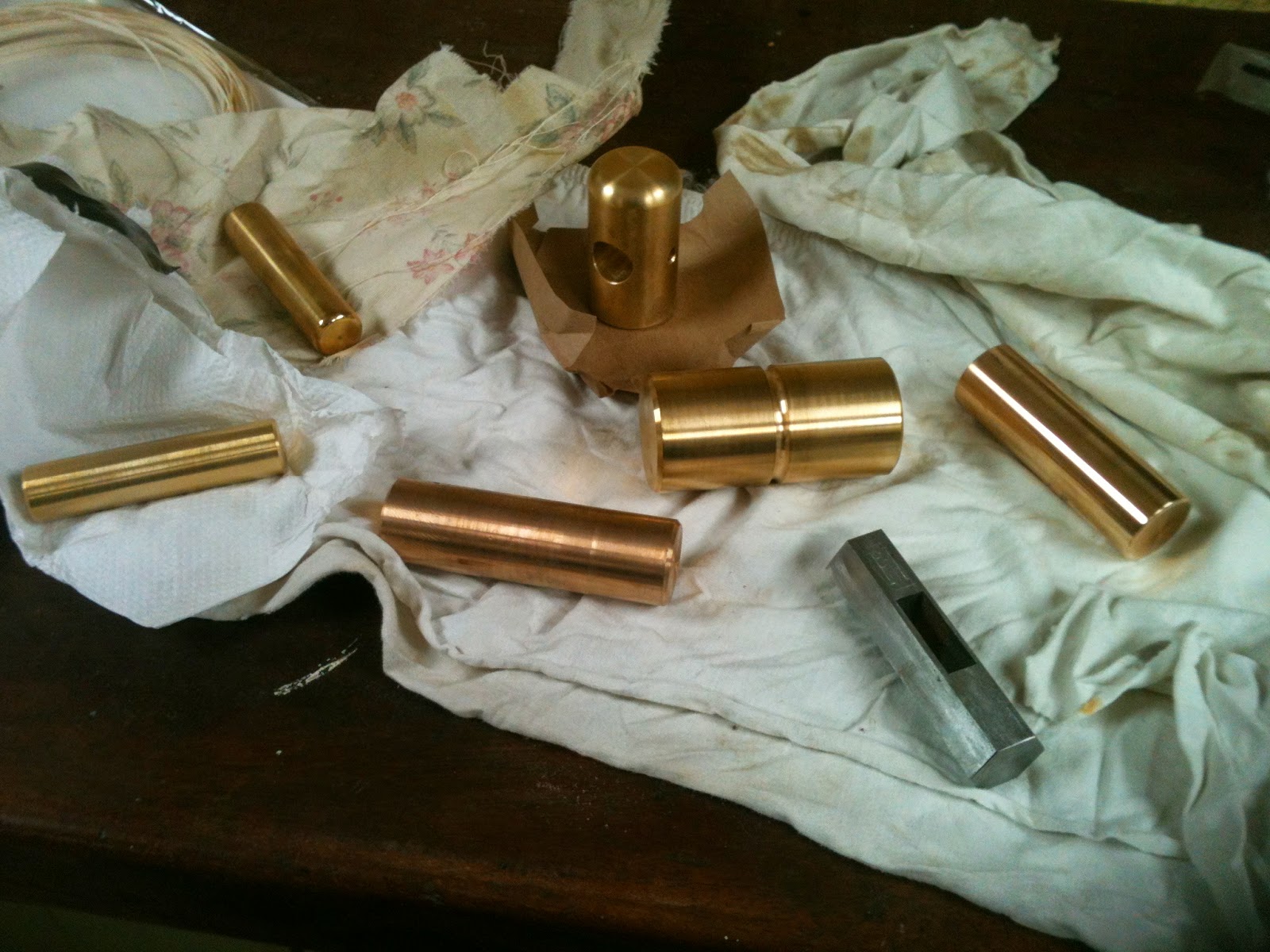 Do I need another Metal hammer head?
Probably not.
A David Barron Hammer head meets some of my stock waiting for handles.
Some nice heavy Bronze, Steel and Brass friends I have awaiting...﻿